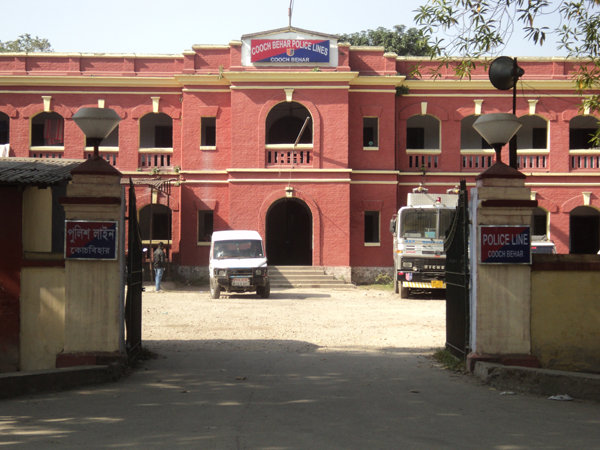 CoochBehar Police Lines is situated in the eastern side of the CoochBehar town and besides the District Correctional Home. All the units viz Wireless Telecom, District Control Room and Sadar Traffic office are attached with the Police lines. Kotwali Police Station is also situated few walks from the Police lines. All the office and barrack of CoochBehar Police Lines are heritage buildings. The old barrack was built in 1927 despite that all barracks are properly maintained and arranged in proper hygienic condition. Two water purifier cum chilled water cooler machines installed in the barracks for the drinking water facility to the all officers and force residing in the Police Lines and also arranged books, journals and newspapers at library opened from morning to evening. All officers and force enjoys outdoor games like football, volleyball and table tennis, Caroms at Recreation Hall of Police Lines for the mind refreshing during their leisure time. Gymnasium is opened in morning and evening for all the police personnel under the supervision of trainer, however, it
needs to be upgraded with the modern equipments. A cultural programme organised on the eve of Durga Puja for children of the police personnel in various categories- Rabindra Sangeet, Bhawaiya, folk dance and recitation. This cultural programme is platform for the children to boost up their confidence in the stage of music world. The Police-Public Friendship Cricket Tournament organised by the CoochBehar District Police at CoochBehar Police Lines during the month of December in every year after completion of Rash Mela and Christmas.